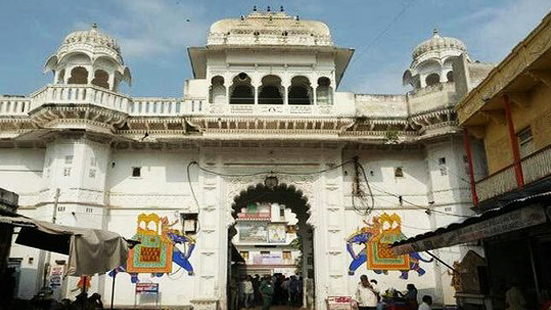 It is a holy place of the Lord Krishna residing in the central deity of the Vaishnava sect, known as Pushtimarg. The place was built in the 17th century on the spot chosen by the lord himself; legends narrate the story that the idol of Lord Krishna was being transferred to a safe place from Vrindavan to protect it from the destructive wrath of Mughal emperor Aurangzeb. But when the bullock cart reached the spot the wheel broke down and got stuck deep in mud, it became impossible for them to move further ahead - that moment the priest accompanying realized that the Lord doesn't want to travel anymore and he has chosen the spot to build a temple for pilgrims to visit. 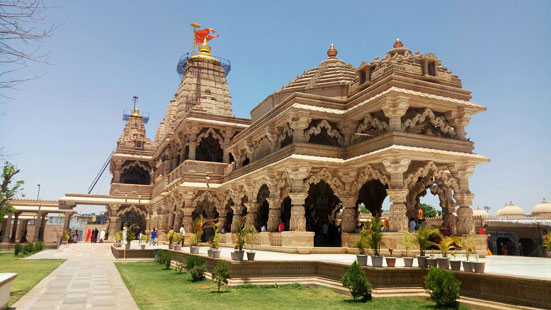 Situated on the Chittorgarh - Udaipur highway in the town of Mandaphia around 40 kms from Chittorgarh the deity is also known as Shri Sanwariya Sethji. It's believed that in 1840 a milkman named Bholaram Gurjar dreamt of three divine statues buried in ground in Chapar village of Bhadsoda - Bagund, when people started digging the place they actually found three idols with an exact description of milkman. One idol was moved to Mandaphia, one to Bhadsoda and one was left on the spot where it was found and later temples were made where a large number of devotees come to pay a visit and seek blessings. 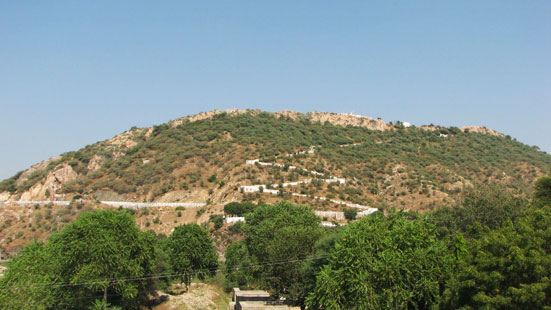 Govardhan hill is near the town of Vrindavan and considered sacred by a number of traditions within Hinduism, also known as Giriraj is the pious center of Braj and is identified as the origin land of Lord Krishna. Following the traditions there is a Giriraj hill located near the city of Nathdwara also. There is a story behind - Lord Krishna once lifted the Govardhan hill on little finger as a protection to his people and cattle from heavy rains and after that got entitled as Giriraj Dharan. Parikrama around the hill is counted sacred in Vaishnava and so a beautiful lane is opened decorated with flowers and lights in sideways. 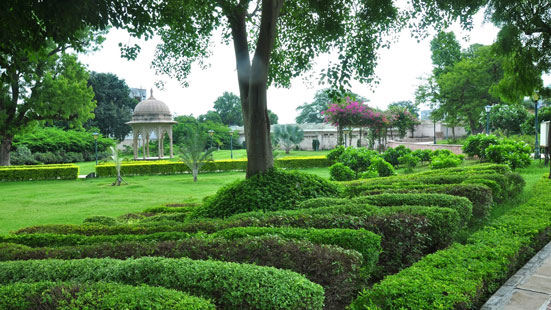 Situated at a distance of one kilometer from the town - Lal Bagh is a beautiful garden renovated a few years back is now a pleasant place to visit for tourists and local residents. Here, there is the Shrinathji Museum wherein old chariots and exhibitions are found. There is also a garden named 'Shravan Bhadarva' wherein fountains and trees are found. The various fruits from here are offered to lord Shrinathji in temple. The garden is beautifully designed with fountains and lightening around to make it even more attractive and a happening place to pay a visit. The place also has a museum inside the premises which has in exhibition some antique ancient accessories and vehicles of Thakurji and is called as Shreemad Vallabh Sangrahalay. 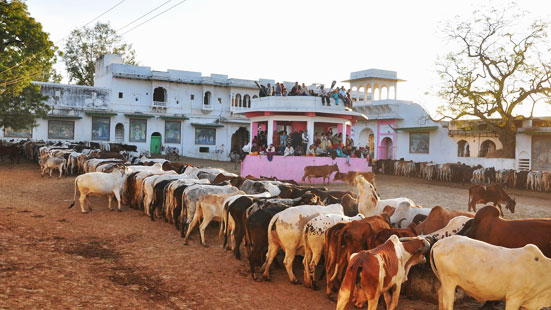 One of the most favorite places of Shrinathji - Gaushala - his personal Gaushala is situated around 3 kms from his haveli and is surrounded by hills, wide spacious open grounds that offer a picturesque view of the milieu. Planned and built with haveli the place holds houses for 2000 cows with a staff of 50 guwals to look after them, care for them. It's believed that Shrinathji loved to spend time with his beloved 'Gaumata' and so no visit is counted complete until and unless you don't pay a visit to Gaushala. 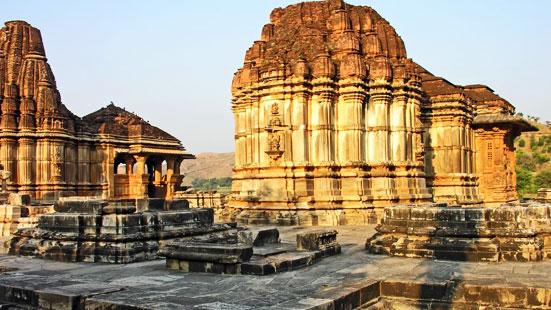 Eklingji is a temple complex of 108 small temples of the 8th century; the main temple of Lord Shiva has four headed sculptures in black stone Nagda. Nagda originally was the capital of Mewar kingdom and now is left with the ruins of the temple as Saas - Bahu temple dated 10th century. The Temple is very grand and magnificent in conception and perfect in execution. The 50 ft. high Shikhar of the temple has a circumference of 60 ft. The sanctum sanctorum has four doors in all the four directions and the door steps are jutted with gems. On each gate there is a Nandi (bull) statue facing the idol. 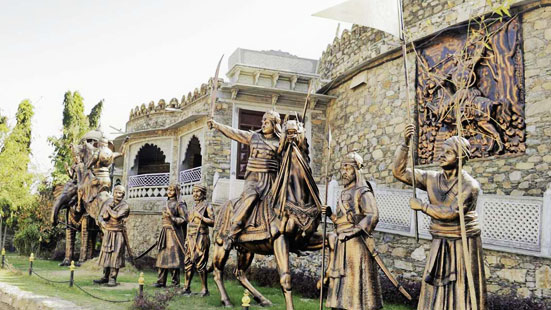 The pride of Rajsamand, District, “Haldighati” is known across the globe for the chivalrous deeds of the great Maharana Pratap, the place is 44 kilometers away from Udaipur and 17 kilometers from Nathdwara. It is nestled in the middle of the Aravali range, this narrow turmeric colored mountainous region which played a stellar role in defending the honor of the Mewar dynasty, is known as Haldighati. It is the site of the Battle of Haldighati, which took place in 1576 between the Kingdom of Mewar and the Mughal Army led by king Mansingh. Haldighati is also known for its charity rose product and the mud art of Molela. Much emphasis is being laid for promoting a private cottage industry by the Department of Tourism. 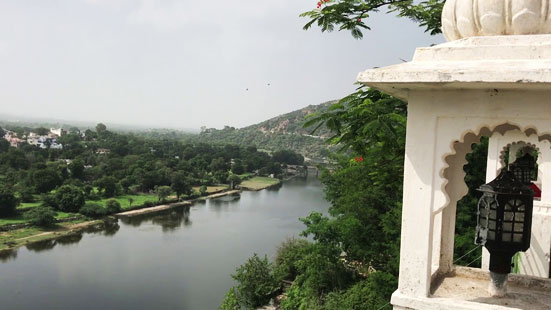 Ganesh Tekri is a temple on hill top of Lord Ganpati, at a distance of 3 kms away from Nathdwara temple the place is worth visiting as it has beautiful gardens - you can get yourself an auto from Chowpatty auto stand to go to temple. The mandir is open all the time for Darshan but each Darshan time is named after pahar and will be able to see a different look of God in different Darshan timings, the most prestigious one to attend is the Rajbhog Darshan in the noon time. During a major Hindu festival the place is flushed with devotees from all over the place or by devotees who very strongly believe in the preaching of Lord Krishna. 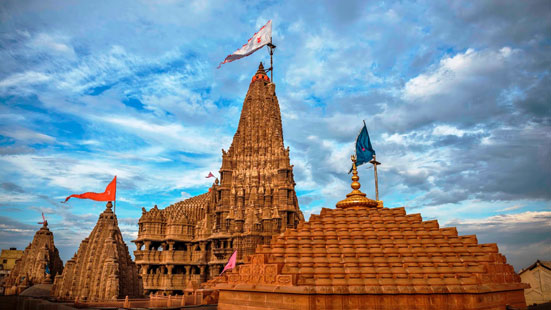 A Chalukya style architecture - Dwarkadhish temple is dedicated to Lord Krishna and is also known as Jagat temple, Dwarka has a dedicated story of its history as land has been in existence since the time of Mahabharata. The five storey shrine is a grand and marvelous constructed place with the help of limestone and sand, the 2200 year old architecture is believed to be built by Vajranabha on land reclaimed from the sea by Lord Krishna. The black magnificent idol of Lord Krishna appears to be so appealing that devotees feel the presence of the lord before them; the temple showcases intricate sculptural detailing done by the ancestral dynasties that ruled the region. 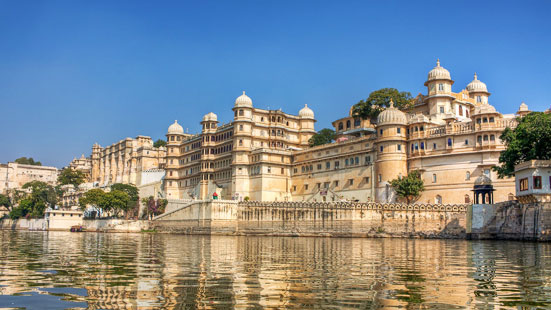 A beautiful city of Rajasthan that is known as Lake city of Rajasthan or Venice of the east as Udaipur has the most number of small and large water reservoirs and is totally surrounded from all sides by Aravali Hills. The place has a lot to exhibit for travelers, beautiful palaces and forts holding an ancestral history of royals, well known temples, museums and Lake Pichola where you can enjoy boat rides and sunsets with your partner. The city is in the valley and is surrounded by four lakes; the city has so much to show to travelers who are really fond of history.